The Devils Triangle, just north of Oak Ridge (TN) in the mountains of the Cumberland Plateau, is made up of some of the most unusual two lane twisty roads in eastern Tennessee.

The adventure ranges from the bucolic rural Tennessee scenery to a view of Brushy Mountain State Prison; from gentle country road sweepers to gnarly steep switchbacks; from serene straights to Dragon like twisties with guard rails of death; from gentle pull-offs to three foot deep rock strewn gullies just inches from the pavement; from peaceful farmsteads to sections of rutted roadway right out of a horror movie.

Yes, the Triangle will get your attention in a hurry. This is no place for the beginning rider.

We (Tailofthedragon.com) first discovered the Triangle in the early 2000s after a friend mentioned it to us. We rode the trusty KLRs over to Lenoir City and stayed at the Hampton Inn located on US 321 just south of I-40. This motorcycle friendly inn is a convenient place to stay if you are looking to ride both the Triangle and the Tail of the Dragon. From the Hampton Inn we took US 321 north and in just a few miles we were on the two lane TN 95 and into some decent twisties. We took a left onto TN 58 (Oak Ridge Turnpike) and then a quick right onto TN 327 north to Blair. Then right onto TN 61 (Harriman Highway) into Oliver Springs.

Here you have a decision to make; whether to ride the Triangle clockwise or counter-clockwise. Here are the things to consider.

Take a left onto TN 62 west to take the clockwise route. This way is the easiest way for many riders to take the sharp switchbacks DOWNHILL. But the pavement in this direction is much rougher.

Take a right onto TN 330 to tackle the beast counter-clockwise. The pavement is in much better condition, but the steep switchbacks are UPHILL so you'll need to use clutch/brake/throttle to keep from stalling.

Experienced riders will have no problem in either direction. Our first trip we did it both directions.

Taking the clockwise route on TN 62 west you have eight easy miles to TN 116 where you hang a right at Schoolhouse Corners and pass through the small town of Petros (pronounced Pee -tross). There's a crossroads store and gas station where many riders stop for fuel. It's more than 30 miles to the next gas station.

Heading north you'll soon see the Brushy Mountain State Penitentiary. This is where Martin Luther King's killer James Earl Ray was incarcerated. He escaped with six other inmates in 1977 but was recaptured two days later. The prison today is a tourist destination CLICK HERE

Rounding a big right turn you'll begin the climb from 1400 feet elevation to Armes Gap at 2150 in the next two miles. The pavement here is good and the twisties intense. Beware of the guardrail and rock outcroppings .... this is no place to go down.

At the gap the road suddenly descends to 1600 feet at the New River in just 1.5 miles. There are some nasty/fun twisties along here with steep drop offs on one side and a deep rock strewn gully on the mountain side. Keep it on the road here or prepare for some hurt.

The next 14 or so miles are fairly tame. Watch-out for coal trucks, some uneven pavement, ruts, gravel, coal dust and kids on four-wheelers sharing the road with you. Some of the scenic spots include giant wind generating equipment on the distant mountain tops, the shut-down Hut Drive-In Deli, the front yard with truck tire retaining wall and flower beds, Grave Hill Baptist Church and Cemetery, the abandoned brick school house, the Blue and White Service Station (the light is on but no one is home), Grey Wolf's Campground (now closed), and the world's longest flying Confederate flag.

On the east end of the Triangle on TN 116 you'll find some of the most exciting twisties and some of the worst pavement, especially if you are heading clockwise. It is here you'll find a number of sharp, steep switchbacks. One section of roadway looked so bleak we called the Haunted Corners.

There is a small country store as you approach TN 330. Good place to stop if you need a drink, snack, cigs or beer.

The bottom connector on the Triangle is TN 330 and TN 62. You can regain your composure on these typical pieces of asphalt. Good pavement but rather straight and boring after doing the northern section. 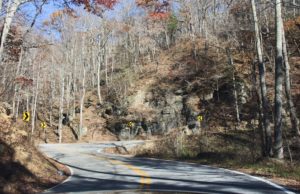 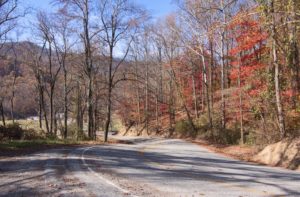 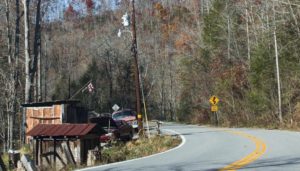 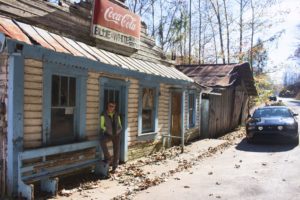 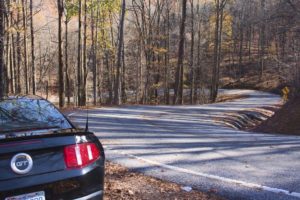 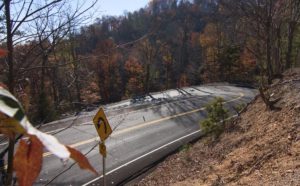 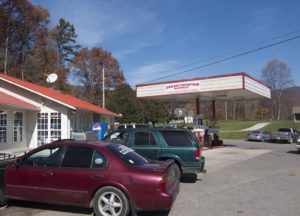 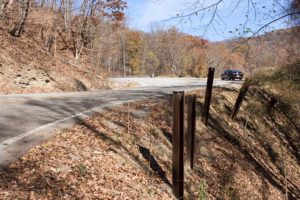 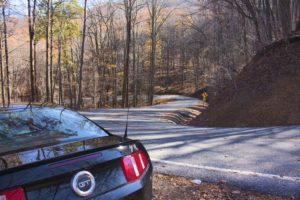 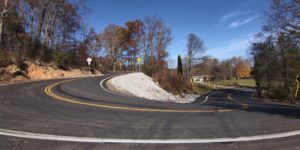 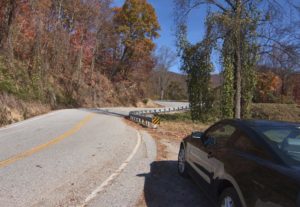